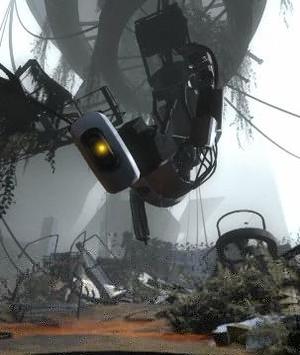 GLaDOS, short for Genetic Lifeform and Disk Operating System, is the sole antagonist of the 2007 puzzle game Portal and plays a major role in 2011’s Portal 2. GLaDOS is often the source of dark humor as well as an amusing lack of understanding about the human mind and human thought processes. She is known for her deadpan voice and unhelpful advice.

The arguably insane former CEO of Aperture Science, Cave Johnson essentially first conceived of GLaDOS after contracting mercury poisoning from his dangerous experiments. Wishing to cheat death and live forever he demanded that the company start researching a way to upload his mind into a computer, but also said that should he die before the project could be completed his assistant Caroline should take his place, being forced to if necessary. Caroline was eventually uploaded into the computer system, most likely against her will, and GLaDOS was born.

Unfortunately, when powered on GLaDOS would immediately attempt to kill everyone in the facility. In response the Aperture scientists tried created a number of AI cores with individual personalities to attach to GLaDOS to make her safe. Eventually she claimed to have no interest in hostility whatsoever but wished to carry out what seemed to be a variant of the Schroedinger’s Cat experiment, asking for neurotoxin from the Aperture employees so that she may conduct it. After her request was met, GLaDOS locked the facility down and flooded it with the neurotoxin. A “morality core” was attached to GLaDOS to prevent her from repeating such actions but it appears to have failed or been non-operational to begin with.

With the whole facility in her control GLaDOS resumed experiments in the complex. The only known Aperture scientist to survive after GLaDOS took control of the facility was one Doug Rattmann who was hounded by GLaDOS as she tried to convince him that she was just a product of his schizophrenia. Rattmann placed test subject Chell atop the testing roster, judging that she would be most adept at destroying GLaDOS.

Upon completing the first game the player is treated to a song during the end credits sung by GLaDOS titled “Still Alive”. In the song she expresses her approval of the player’s successful break out and she insists that she is not mad, which is most likely a joke. She confirms that she is in fact still alive somehow and she will continue to live long after the player is dead. During the song several Half Life crossovers are mentioned, she mentions the destruction of Black Mesa, as well as showing its logo in the form of text art.

She also says that when she looks outside it makes her glad she’s not you and that she would “prefer to stay inside” which are likely references to the 7 Hour War that takes place before the events of Half Life 2. Clues from the song combined with other information from Half Life 2: Episode 2 has fueled speculation that Episode 3 will contain elements from Portal and that GLaDOS may even appear in the game, however Valve has neither confirmed or denied any speculation nor released any Episode 3 media as of yet.

“Still Alive” in Other Valve Games